Even though the United States is now considering proposals to arm Ukraine’s military, to counter aid to separatists from Russia, the war in the eastern provinces of Donetsk and Luhansk has nearly disappeared from American television screens.

But the war can be viewed, in all its horror and brutality, by anyone with an Internet connection, as one constant feature of events in Ukraine in the past year — since protests in the capital gave way to a bloody insurgency in the east — has been the relentless effort by Ukrainians to share evidence of what they are going through on social networks.

So, almost as soon as it was reported on Tuesday that at least seven civilians had been killed in a rocket attack on the government-controlled town of Kramatorsk, video clips recorded by residents were posted on YouTube and VK, the Russian answer to Facebook, giving a vivid sense of the terror the residents felt.

In one clip viewed more than a million times on Tuesday, a woman’s terrified voice reacted to the blasts as the rockets landed in the center of the town and at what she identified as the military base on its outskirts.

[Video: Images recorded during a rocket attack on Kramatorsk, Ukraine, on Tuesday. Watch on YouTube.]

Images recorded during a rocket attack on Kramatorsk, Ukraine, on Tuesday.
Video by Misis Djyli

More video, recorded on a camera mounted on a car’s dashboard, also appeared to capture the sense of fear as rockets landed in the town.

[Video: Video uploaded to YouTube on Tuesday, said to show the rocket attack on Kramatorsk. Watch on YouTube.]

Video uploaded to YouTube on Tuesday, said to show the rocket attack on Kramatorsk.
CHANNEL 6, via YouTube

More video, of an unexploded rocket that landed in the center of Kramatorsk, was posted on VK. 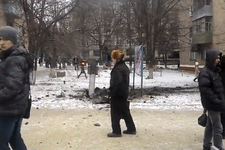 Interactive Feature | Video of an Unexploded Rocket in Ukraine

One of the few journalists present in the aftermath of the attack by separatists, Christopher Miller of Mashable, shared a graphic image on Twitter of one of the civilians killed in the town, previously thought to be far from the front lines.